The second Social Impact Arts Prize 22 workshop at the Rupert Museum, focused on the power of storytelling through which artists and their art practices can reflect and comment on the world. We watched films on artists whose researched practices transform the everyday into the extraordinary, rubbish into pieces sold at Sotheby’s and lived environments into living art. These individual presentations created a thinkspace wherein the workshop attendees could ask questions, imagine their own projects come to life, and meet fellow artists and creatives. If this excites you, join our next workshop and participate in the conversation. 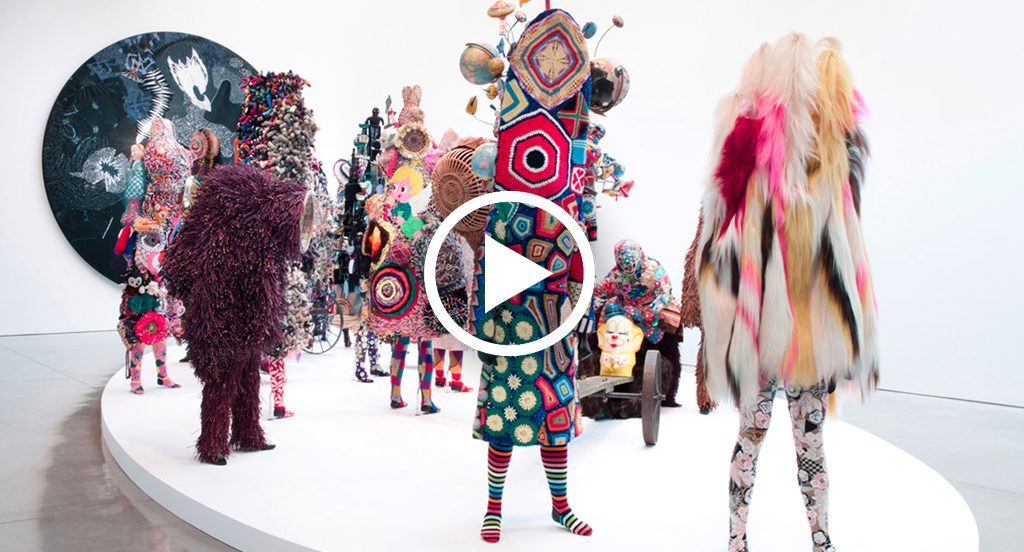 American artist Nick Cave creates “Soundsuits”—surreally majestic objects blending fashion and sculpture—that originated as metaphorical suits of armour in response to the Rodney King beatings and have evolved into vehicles for empowerment. Fully concealing the body, the “Soundsuits” serve as an alien second skin that obscures race, gender, and class, allowing viewers to look without bias towards the wearer’s identity. Cave regularly performs in the sculptures himself, dancing either before the public or for the camera, activating their full potential as costume, musical instrument, and living icon.

The artist also works with choreographers, dancers, and amateur performers to produce lavish community celebrations in untraditional venues for art. Dazzling in their movement, Cave’s sculptures are crafted in collaboration with artisans from a dizzying array of materials that include beads, raffia, buttons, sequins, twigs, fur, and fabric. The “Soundsuits” are also displayed in exhibitions as static sculptures, arranged as groups of figures in formation that are striking in their diversity and powerful stance. Cave’s sculptures also include non-figurative assemblages, intricate accumulations of found objects that project out from the wall, and installations enveloping entire rooms.

Aja Marneweck is an NIHSS Specialist Artist in Residence Fellow in the Laboratory of Kinetic Objects (LoKO) at the Centre for Humanities Research at the University of the Western Cape. Marneweck’s work engages the multimodal creative and discursive discipline of puppetry as an agent for transformative social, spiritual and cultural practices, as well as considering the unique lens it might offer radical contemporary creative practices in South Africa today. Marneweck holds the first South African doctorate in Practice as Research in Puppetry Performance entitled “Towards a Feminine Semiotic: Spiritual and Sexual Emergency in Women’s Puppetry and Visual Performance”.

The Barrydale Giant Puppet Parade is a journey through the unordered materialities and pressing realities of life in South Africa today, a landscape at once personal and political, where self and other might meet in strange, imaginative and co-creative ways in the multimodal surfaces of a large-scale public puppetry intervention. The fostering of co-creative, ecocentric practices, and spaces for engagement in South Africa today, may reveal a propensity towards puppetry processes that stimulate new ecologies of trans-embodiment through an imaginative political exchange and mobilisation of performers, stories, puppets, makers, and audiences.

The Barrydale Giant Puppet Parade began in 2010 as a project of the Handspring Puppet Trust (founded by the Handspring Puppet company based in Cape Town South Africa), in partnership with Barrydale community-based organisation Net vir Pret (working primarily with young people and children from Barrydale and the surrounds), the Magpie Arts Collective (a Barrydale-based international sculptural art and design company), the University of the Western Cape’s (UWC) Centre for Humanities Research (CHR) and its developing research platform, the Laboratory of Kinetic Objects (LoKO). It was instigated to take place on 16th December, as a direct creative gesture towards the South African National Day of Reconciliation as an artistic response to the highly visible, constantly revealing traces of Apartheid and Colonialism still at work in the Barrydale area. Derek Joubert of Net vir Pret, describes how those Barrydale residents who were classified ‘Coloured’ by the Apartheid regime ‘were dispossessed of their homes in the 1950’s and moved to a dusty township over the hill and out of sight’ (Joubert 2019). Erasmus writes how various Khoe and San1 communities were affected by forced removals, ‘so-called “black spot removals” – and were re-established in urban “locations” or “coloured reserves”’ (Erasmus 2010, 82).

I am fascinated by the way in which people categorise and arrange objects in their homes. My mother’s side of the family is primarily based in Namibia, with my grandmother having roots in Rehoboth, while my grandfather moved from South Africa to Rehoboth. My father’s side of the family comes from Stellenbosch in South Africa. During apartheid, my parents were married in Namibia. Just before Namibia’s liberation from apartheid South Africa’s colonial rule, the immorality act and mixed marriages act were abolished, making it possible for my parents’ union. In South Africa, during apartheid, they were categorised into different racial groups. It is not uncommon nowadays to be the offspring of a ‘racially’ and culturally ‘mixed’ marriage, but currently coming from a mixed cultural heritage, I always feel like we are creating our own rituals, myths and stories about our ancestry as I don’t see myself as being culturally grounded to any particular group. Perhaps this is a post-apartheid reality for many more people.

So, despite the various formations and debates around identity in post-apartheid South Africa, I have always felt grounded by the objects in my parents’ home and the homes of my family and friends across Namibia and South Africa. I am specifically captivated by the display cabinets that I remember seeing in friends and family homes in Namibia, where I grew up during the most formative years of my childhood, and later in South Africa. I can’t pinpoint the exact moment I became aware of display cabinets as a visual pattern, but once I noticed them, they couldn’t be un-seen and their dominance in the interiors of my family and friends. Since becoming aware of the trinkets, photographs, brass ornaments and porcelain figurines and teacups, to name a few of the items you can normally find on and in these cabinets, the ornaments arranged and displayed in these display cabinets have had a profound impact on how I try to recreate some kind of cultural significance in my own understanding of identity formation. It was only once I started writing about the prominence of these display cabinets in my PhD, however, that I became aware of how different generations and cultural groups incorporate display cabinets into their homes in diverse yet similar ways. Since writing about their visual prominence in lower-class to lower-middle-class ‘coloured’ homes, I have realised how important the objects arranged in display cabinets are as the cabinets become visual storytelling mechanisms where we are able to portray the abstract parts of our identities that cannot be fully articulated in words.

Many of our objects, that I have a nostalgic attachment to, have travelled with us from Namibia and are heirlooms, others have been collected along the way as we have moved to different places in South Africa from Namibia. Because of these objects’ biographical, material, and aesthetic qualities, I became interested in studying and portraying the tangible intersections of recent material history that is localised and ties into historical events in the places I have occupied as well as how this links to the identities I have assumed at various points in my life. As I have learnt more about where my ancestors might have come from, I have started to speculate, imagine and mythologise about all the different cultural groups I could possibly have come from, as well as negate some. Not knowing exactly who these groups were, adds an element of mystery and possibility to how I choose to historically position and construct my identity in the present. From this place of possibility, I have imagined all of the cultural intersections that might have taken place. Although a part of me wants to know each detail, another part of me wants there to remain an element of vagueness. The objects I use in my work allows me to imagine these intersections in a physical form that encapsulates a moment in time that might be lost to changing taste, aspirations, and cultural flux.

This veil of partial historical ignorance has allowed me to have a certain amount of agency in how I reimagine my own narrative as well as how I might link it to different people and groups historically and presently. This particularly relates to how I have been racially categorised as coloured in South Africa despite not necessarily accepting this label as a signifier. Michele Ruiters says that some coloured people consider their ‘mixed’ heritage as something that happened so long ago that it is no longer important in their current consciousness. ‘Mixture’ has taken on a new association in South Africa after apartheid where it points to children who have been born of culturally ‘mixed’ couples. Although race is still prevalent in a South African consciousness, there are no longer any statutory laws preventing the moral policing of ‘mixture’, giving children born in a post-apartheid South Africa more agency to imagine themselves in any way of their own choosing. Reflecting on the material culture around me has provided a new dimension to my identity where I was able to imagine and fashion how I translate the various layers of my identity into material forms.

Filmed over nearly three years, WASTE LAND follows renowned artist Vik Muniz as he journeys from his home base in Brooklyn to his native Brazil and the world’s largest garbage dump, Jardim Gramacho, located on the outskirts of Rio de Janeiro. There he photographs an eclectic band of “catadores” — self-designated pickers of recyclable materials. Muniz’s initial objective was to “paint” the catadores with garbage. However, his collaboration with these inspiring characters as they recreate photographic images of themselves out of garbage reveals both the dignity and despair of the catadores as they begin to re-imagine their lives. Director Lucy Walker (DEVIL’S PLAYGROUND, BLINDSIGHT and COUNTDOWN TO ZERO) and co-directors João Jardim and Karen Harley have great access to the entire process and, in the end, offer stirring evidence of the transformative power of art and the alchemy of the human spirit.

From the director, Lucy Walker: Vik, as an artist, plays between these levels of proximity and distance, between showing the viewer the material and showing them the idea, revealing the relationship between the paintstrokes and the scene depicted by the paint. The portrait is Isis, it is a Picasso, it is a bunch of garbage, and it is a work by Vik Muniz – all at once. You can view things close in or further away. Likewise you can fear people from afar or you can go interact with them. I love the Eames’s POWERS OF TEN and I wanted to create a social analog. To start with we see the place from GoogleEarth, then from a helicopter, then from a car, then from a safe distance, then from a first meeting, then from a growing friendship, then from it having changed you fundamentally and permanently.

Just as Vik wants the portraits to serve as a mirror in which the catadores may see themselves, so I hope the movie serves as a means for us to see our journey to becoming involved with people so far from ourselves. To zoom all the way in to caring about someone who was previously as far away as it’s possible to be.

REGISTER BELOW FOR THE SOCIAL IMPACTS ARTS PRIZE 2022.